New Light On The White Horse & Rider Of Revelation 6:2

Rev 6:2 And I saw, and behold a white horse: and he that sat on him had a bow; and a crown was given unto him: and he went forth conquering, and to conquer.

What I would like to focus on in this verse is the word bow. Most have always believed this word refers to a weapon, a bow and arrow to be exact. And because the rider goes forth conquering this solidifies the belief for a weapon. In fact, there are many ways to conquer without using a weapon.

First let’s look at that word bow. It is used to mean three things in scripture;

That covers the meanings of the word bow in the Bible. Now, let’s look at Revelation 6:2 and see which one of these meanings really fits what the antichrist is carrying.

Rev 6:2 And I saw, and behold a white horse: and he that sat on him had a bow; and a crown was given unto him: and he went forth conquering, and to conquer.

This word ‘bow’ is used only once in the whole Bible. It is the Greek word ‘toxon’, and it means ‘a bow, apparently as the simplest fabric’. What? I have never heard of a bow and arrow referred to as fabric, nor would that apply to bowing down to someone. But where have we been seeing many rainbow symbols lately? Since the Supreme Court has legalized same sex marriage across this great nation of ours we have seen rainbows everywhere! And a fabric rainbow most definitely could be the homosexual flag that is waved in all the parades, etc. What I propose to you is that in Rev 6:2 the antichrist is carrying a rainbow flag or banner because he will be the champion of same sex marriage and gay rights, conquering by using laws designed to eventually, in the near future, jail anyone using hate speech (quoting the Bible) against homosexuals.

And why wouldn’t this fit perfectly? Remember: Luk 17:29-30 But the same day that Lot went out of Sodom it rained fire and brimstone from heaven, and destroyed them all. Even thus shall it be in the day when the Son of man is revealed. 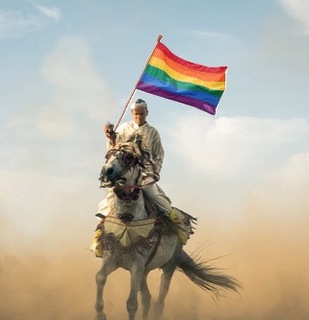 This is exactly what I was going bonkers over the past week.  Is Strong wrong with G 5115???????   Every where and one says that toxon could be a weapon or arrows, even medical sites state that toxicity comes from poisoned arrows from toxon and those who knew both Hebrew and Greek translated in the Septuagint Hebrew words on occasion for bow (weapon) and also arrow into the Greek toxon.   Why in the world did James Strong say that toxon could be a gentle fabric coming from the root of to bring forth, bear.  In this current age, I hardly agree that the rider of the white horse has conquered the world without any physical weapon by deception with some sort of bow (not banner) which will lead to much violence as they try to remove those who disagree.

Comment by Linda on July 14, 2015 at 11:06am
Thanks William, I'm still studying this. When the gay marriage was legalized and I saw all those dumb flags, some bells just went off in my head.

Is that not Interesting? and may give credence to your interpretation (at least in relation to the Septuagint) cause The verse in Gen (9:13) is speaking of a rainbow but doesnt use the Greek for "rainbow" for some reason it uses the Greek for bow (specifically/ Toxon as used in Rev 6!)! Seems you may have found something but Im not certain (yet)

I will say that the septuagint uses the Greek word in Gen.! Interesting!

Comment by Linda on July 14, 2015 at 8:31am
The word bow in rev 6 is used only there and because it comes from a word that means "bow, as simplest fabric" I fail to see how it could be an actual bow and arrow. I stand by what I believe it to be, a gay pride flag!

Yeah I would need to see it too! The earliest texts we have is in Greek not Hebrew (in relation to Revelations) so for it to work the same as it does in the Hebrew it would have needed to be given in Hebrew yet I consider the Greek authoritative and in the Greek it doesnt work cause rainbow in Greek is Not the same term as bow in the Greek (see Rev.4:3)

Comment by Linda on July 14, 2015 at 7:55am
William- I would need to see proof of the New Testament Word in Hebrew. I believe it was written in Greek. Where can I find this Hebrew word that the writers used for 'bow' here in Rev 6:2?

Interesting. The Greek for rainbow is used in Rev.4:3 though and its "iris" (G#2463) and the word for "bow" in Rev.6:2 is "toxon" (G#5115) so while the Hebrew in Gen.27:3 (bow/weapon) and Gen.9:13 (bow/rainbow) are the Same word "qesheth"(H#7198) with (of course) the same root "qashah" (H#7185) In the "NT" Greek texts the words dont work like this so the interesting fact that the word for bow (weapon) and bow (rainbow in the Hebrew are the same the only way we could apply that to Rev.6:2 is if we believed the book of Revelation was originally written in Hebrew and thus the greek fell short in carrying the meaning and thus our Greek texts are wrong and misleading. I do believe the homosexual agenda and successes in society are a sign of Great Apostasy Im not sure its mentioned in Rev. other than for one in a Hebraic viewpoint. I'm not the best at Greek but the connection with a fabric is interesting as well! Thanks for sharing , very thought provoking!