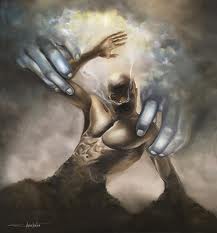 Intro: Gen.1:26 And God* (Elohim/devine judgement that is a plural that can be used in a singular context) said, Let us* make man (אדם)/ (Mankind/plural) in our* (plural) image, after our*(plural) likeness: and let them*(plural) have dominion over the fish of the sea, and over the fowl of the air, and over the cattle, and over all the earth, and over every creeping thing that creepeth upon the earth.

(Man here is to mention mankind in general, Elohim said "let us make man in our image", this includes the one speaking (Elohim- divine judgement and authority)

Gen.1:27 So God created man (את־האדם/ spacific singular man, definate article) in his own image, in the image of God created he him; male and female created he them. (1 Cor.15:45,47/ Eth Ha Adam & Yeshua were in the exact Image of Go one was earthly the other Holy)

(Man here (vs.27) is to Say THE Man. Very Spacific Individual unlike just saying man (mankind) in general as in vs.26. Mankind was created on the sixth day and this consisted of the creation of Et Ha Adam / Eth Ha Adom (The Spacific Adamic Man). In the sixth day we are told that the LORD created The Man (singular) in His image male and female created he them (plural from the singular). And dominion was given to him over the animals and plants. This took place on the 6th day Gen.1:31)

Gen.2:7 And the LORD God formed man (Eth Ha Adam) of the dust of the ground, and breathed into his nostrils the breath (neshamah) of life; and man became a living soul .(nephesh) /(Job.33:4)

Gen.3:3 But of the fruit of the tree which is in the midst of the garden, God hath said, Ye shall not eat of it, neither shall ye touch it, lest ye die. (Eve's discription of the commandment given was differ than the commandment given to Adam she said touch/ naga Hebrew #5060/ (to lay with a woman) (Also notice Fig Leaves were worn around privates afterwards and no mention of an apple/ The trangression first happened between Eve and the serpent Then Eve with Adam) To sin is to trangress God's Law thus committing adultry (spiritual/ physical). Why was a form of punishment to Eve pain in childbearing? Gen.1:27-28 mentions Eth Ha Adam being created on the 6th day of creation. It shares the same discription found in Gen.2:16-23 where Eth Ha Adam becomes the emphasis rather than the 7 days of creation. This is evident with the paragraph (Parsha) change (see comment section).

So it seems clear to me that the Scriptures say that Eth Ha Adam (The Man)was created on the 6th day (as mankind in general continues to be born we know that God created all things in 6 days (not 8) and rested on the 7th.)

ROM.14:5 Early "pre adamites" theology is documented here and in more recent times among people like Alexander Winchell and others.

I will leave the individual to conclude their own studies on the subject.

Gen.3:20/ Just personal notes/ Adam calling Eve mother of all living in relation to the fact that she bares children. It certainly didnt mean that Eve gave birth to everything alive on the earth. Also in relation to the sin in the garden, pain in conception was an effect and through that conception there will raise up one who overcomes the serpent which beguiled the woman which extended to Adam which brought forth death. Through her womb from Eve to Mary would come the "seed of the woman" and He IS Life. Some sources say Mother of Life. Example the Tanakh reads "And the man named his wife Eve, because she was the mother of all life." Eve literally means Life giver, Life spring , life,http://www.bibletruths.net/archives/BTAR127.htm so naturally it would be logical to give her a name highlighting the role of mother and conception just as G-d's responce Did. (Rashi: Eve: Heb. חַוָּה. This coincides with the expression of חַיָה, living, because she gives life to her offspring, as you say, (Ecc. 2:22):“For what does a man have (הֹוֶה) ?” with the expression“being” (הֹוֶה) . [i.e., The “vav” and the “yud” are interchangeable.])

The Hebrew takes note of what we call paragraphs within a Hebrew scroll (this concept isnt carried over when translated into the English and thus the Hebrew reader may have a leg up with properly dividing the Word.) These are called parshas. There are different types of breaks within the Hebrew texts.

The Major (or Strong) seperation (parsha/ "paragraph" change) is called "Parsha P'tuchah" and is recognized by at least 9 blank spaces between Words all the spaces on the same line.

Thus Gen 2 could be said to appropreatly begin with Gen.2:4.

Each parsha has its own main idea (and or sub theme). Gen.2:4-Gen.3:15 is a parsha that ends with a stumah (weak break) However the next verse Gen.3:16 is a parsha of its own and ends with another stumah.Gen.3:17-21 ends with a petuchah.

So with this simple knowledge of the Hebrew we confirm the emphasis has changed beginning with Gen 2:4 and the emphasis is The spacific man ("Eth Ha Adam") that was mentioned prior in Gen.1:27. Beginning with Gen.2:4 we make Him and them "male and female" and their walk with YHVH the main idea or theme.